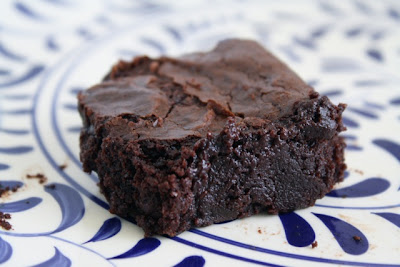 First of all, there's the eternal fudgy-versus-cakey debate. Then you might be forced to decide between dark or semi-sweet, and finally, if you're really pressed for time, between from-scratch or boxed. Bring up the topic of add-ins (walnuts or pecans? marshmallows? toffee pieces? mint swirl?) and the issue gets even more complicated. But there's one kind of brownie that almost always get a bad rap: the cocoa-based brownie.

In my kitchen, cocoa powder is the ingredient I reach for when I've eaten all my 'real' chocolate but still need that fudgy fix. It's my go-to for last minute potluck desserts, when I don't have time to run to the store for 'better' ingredients. It's my "this-will-have-to-do" substitution when I run out of chocolate mid-recipe. In short, I've always treated cocoa powder like chocolate's plain-Jane sister; the shelf-stable, last-ditch, emergency alternative for actual chocolate.

It's a shameful truth, but I get the feeling I'm not alone in this. There seems to be this unvoiced maxim, in the blog world, that baking with cocoa is somehow less. That if you don't swirl Scharffen Berger into your browned butter brownies, douse your homemade vanilla bean ice cream in molten Callebaut, or bake Valrhona into your Jacques Torres Chocolate Chip Cookies, you're not really baking.


Don't get me wrong, I'm not here to disparage high-end chocolates: I'm sure they produce gorgeous results, but their richness comes at too dear a price for this home baker. Instead, I'm here to redress the prevailing prejudice against cocoa-based brownies, to remind you that cocoa can be an intentional choice, not just a failsafe or fallback. It's a simple and delicious lesson to learn. And trust me, your tastebuds - and your wallet - will thank you!

This simple recipe turns out silky, sultry, oh-so-chocolaty brownies every time, and the best part is that you don't even need expensive cocoa - even Hershey's will do nicely. In this recipe cocoa is the star, not just an afterthought, and because there isn't much flour included, these brownies have the richest, fudgy texture. Unbaked, the batter is as glossy and smooth as dark silk. This molten richness remains when the brownies are slightly underbaked - just the way we like them - but you can bake them fully for a thick and satisfyingly chewy treat. They can be whipped up in less than 10 minutes, using ingredients you most likely already have in your pantry - so what are you waiting for?

In case you need further convincing (and you shouldn't!), this recipe has a distinguished pedigree - it has been featured in Bon Appetit and comes from the doyenne of desserts herself, Alice Medrich. Certain versions don't include the browned butter step - but I think it makes these brownies so much richer. Browned butter or no, with such big names in their corner these brownies are guaranteed a total knockout! 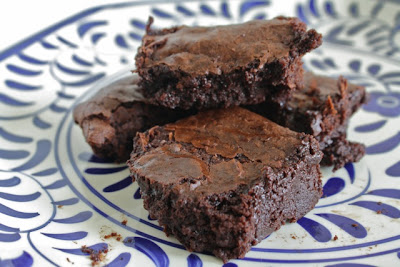 Preheat oven to 325°F. Line an 8x8x2-inch baking pan with foil or parchment paper. Press foil/paper firmly into the corners of the baking pan, leaving a 1 or 2 -inch overhang. If using foil, grease lightly.

Heat butter over medium heat in a medium saucepan, until butter is completely melted. Continue cooking, stirring often, until butter stops foaming and begins to brown (about 5 minutes). In order to prevent burning, remove butter from heat when browned bits first begin to form and butter becomes fragrant (it should smell deliciously nutty - if it smells sour, it's burnt!). Remove from heat and immediately add sugar, cocoa powder, water, vanilla extract and salt. Stir until well combined (mixture will be quite grainy at this point).

Let cool 5 minutes (mixture will still be hot) before adding eggs, one at a time. Beat well between each addition, so that mixture becomes glossy rather than granular. Add flour when batter begins to look thick and shiny, stirring vigorously for about 50-60 strokes. Stir in nuts, if desired. Pour batter into prepared baking pan.

Bake for about 25 minutes, or until a toothpick inserted in the center comes out almost clean. Cool in pan, on a wire rack. Use foil/paper overhang to remove brownies from pan. Cut with a plastic knife (don't ask me why, but this works!). Store any undevoured brownies in an airtight container for 2-3 days.

A few notes: As written, these brownies are delightfully simple to make and, in the words of Kylie Minogue, I wouldn't change a thing. That being said, on the last go-round I did end up making a few adjustments. This is entirely a matter of preference, but since Matt and I like thicker, fudgier brownies, I baked ours in a loaf pan and didn't change the baking time. This gave us a small number of very thick, very rich, and slightly underbaked brownies. We also left out the nuts and didn't miss them, but again, that's a matter of preference. One change I would insist on, however, is to use parchment paper instead of foil, if at all possible. Parchment paper releases better - especially if your brownies are still a little molten.

Rachel
I'm a writer, a reader, a traveler and an eater and this is where all my interests intersect!